Henri undertook the role of Chairman in 2022 to continue advising and guiding the strategic direction of Simon Miller Paper and Packaging, one of the oldest family-owned independent paper distributors in the United States. As the 3rd generation of the company started by Simon Miller in 1926, Henri served as CEO for more than 40 years concentrating on the company’s expansion into new product segments and geographies.

A graduate of Drexel University with a chemical engineering degree, Henri remains involved with paper industry organizations while also active at his alma matter, where he is a member and chair of multiple advisory boards. He was inducted into the Drexel 100, the highest level of alumni recognition. Henri also dedicates his time in various charitable endeavors. 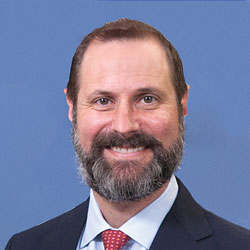 Jeffrey is the President and Chief Executive Officer of Simon Miller Paper and Packaging, overseeing the company’s organizational structure, strategy and overall operations.

In 2017, Jeffrey joined Simon Miller, becoming the 4th generation of the company. He held the positions of Director of Operations and Vice President prior to his current role, where he supported the execution of the company’s innovation and growth efforts.

He began his career in financial services and later specialized in mergers and acquisitions and business development, working on numerous international assignments in Asia and South America.

Jeffrey is a graduate of Tulane University, New York University Stern School of Business and IESE Business School in Barcelona. Elena joined the paper industry after an extensive career as an educator and professional development leader in the field of International and Higher Education. She holds a PhD in Humanities from the University of Salamanca, Spain and received formal training at Harvard University in cognitive psychology frameworks applied to cultural transformation, becoming a coach and researcher in several projects lead by this institution. She moved to Philadelphia in 2017, where she taught courses at Jefferson University focused on cultural awareness and medical attention to the Latino community and developed a private consulting practice on corporate organizational design.

Elena joined Simon Miller in 2018 to advance the efforts of the company’s goal to increase focus on developmental projects in the paper industry. She manages all operational processes and strategic collaborations in support of this vision.